Day two in the park 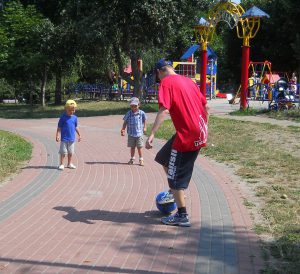 Thursday began like Wednesday, only on this day we somewhat knew what to expect.

We were so encouraged when we finally arrived at the park — some of the children from the day before had returned and some had brought friends with them. Hooray! And the impatient grandmother from the day before also returned with her grandson. Carnelia made a special balloon for them and I ran it to her as she was exiting the park yesterday…I received a huge hug, and special thanks for such a surprise. Amazing how a balloon can soften an attitude! 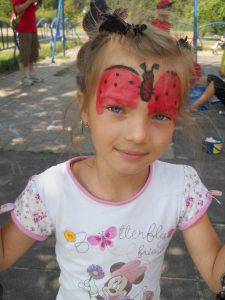 We also had the pleasure of one of the Helping Hands club children — Masha, daughter of Viktor. Viktor has been a friend of UMO for years now, overseeing our workers at Hospital #1. He located the two families that we are helping to repair their ceilings.

Masha rather shyly joined in the fun — the first to have her face painted on this day. Of course, while SHE was being painted other children were attracted to that location and a line began to form! 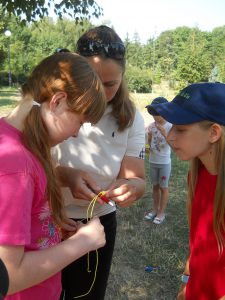 In addition to balloons, some children were taught to make lanyards, some enjoyed the sidewalk chalk and others loved the bubbles. Such a simple yet effective way to make children smile!

Lunch in the park featured grilled chicken that we had ordered earlier in the morning. And our family friends joined us once again. At the conclusion of lunch, Samuel presented them with two scooters as a gift. Talk about happy children! They were ready to explode with joy and thankfulness. They honestly couldn’t believe that these scooters belonged to them. 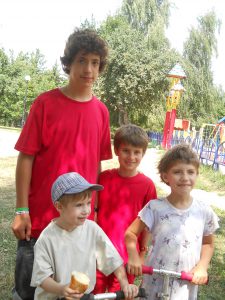 After lunch we again spread out the over-sized Twister board. And again, when the children understood that there was no cost, many joined in the game. I had to smile when I saw our shy Masha as the only girl playing at one point! She loved it.

More ice cream and a group photo in the park before meeting our painters and returning to Bucha. And, not surprisingly, we had another delicious meal!

Elian shared her favorite verse about praying in private and she confessed that she didn’t always like to pray. But she loves it now. Why? Because she disciplined herself to pray even when she didn’t feel like it. She challenged the children to do the same. 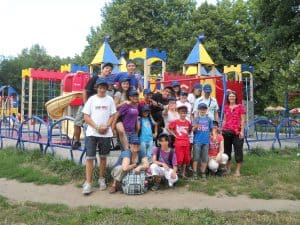 We talked briefly about the plan for the next day — we were heading to a rehab center at the invitation of two charitable funds in Ukraine. The children we might see had all been diagnosed with special needs, primarily autism. We weren’t exactly sure what we were going to do there but we prayed that God would lead us clearly.