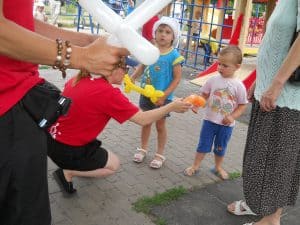 Our first full day as a team…

We divided into groups and subgroups: Two groups went to two different flats to do some major repairs on ceilings. Neither of the families would have been able to pay someone to do this work, and were surprised to find that a group of strangers from Switzerland would do this work for them…for free. Apartment 1 was occupied by a husband (thankfully at work), his wife and three children. Apartment 2 was also a family but the father was home. He jumped right in to assist the Swiss workers as they prepared the ceiling for paint on the following day. 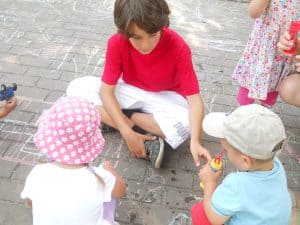 The rest of the team walked to a nearby park and split into smaller groups. Some made balloon animals. Some painted faces and arms. Some shared scooters. Some blew soap bubbles. Some drew with chalk on the pavement and invited the children to join them.

Oh, the smiles…both from the givers and the recipients. They could not really speak to each other, but they most certainly communicated! 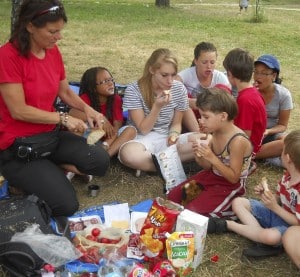 Some people wanted to know WHY this group of children would travel all the way from Switzerland to this park in Kyiv, Ukraine. The answer typically was to bring smiles to the faces and joy to the hearts of the children. If pressed further, they would say that they themselves had so much joy from the Lord that they just wanted to share it. And the joy was so evident: seen in the sparkle in their eyes, seen in the glowing smiling faces, and seen in their gentle leading of the children to join with them in the fun.

We all reunited for a picnic in the park…and even the mother with her children living in Apartment 1 joined us there. Corinne had noticed that there was absolutely NOTHING in their refrigerator and wanted to be sure they had SOMETHING to eat that day. They reluctantly joined the group and were so happy to eat until they were full. 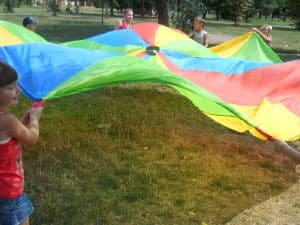 In the afternoon, the flat workers returned to their painting jobs and the park children returned to their posts. But we also added some group play: a large colorful parachute that was instrumental in several different games. It didn’t take too long before there were no Swiss children holding the parachute — they had each given up their spot to a child in the park. 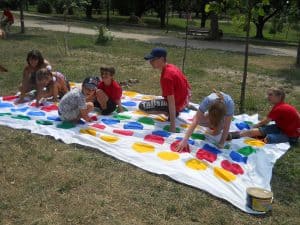 The other group activity was a giant game of Twister. It was a joy to watch all the children join in the excitement and laughter.

We left the park for our 2-hour public-transport trip home…two buses and a metro! But not before we purchased ice cream for the walk!

Upon our return to our lodgings, we had another delicious meal prepared by Luba and Nick. They have never failed to delight our taste buds. 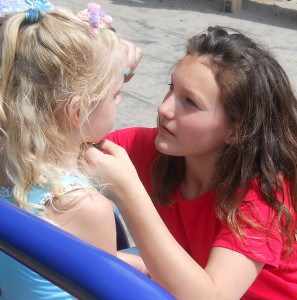 Our devotional time was the first in a series of favorite verses shared by the leaders…and a brief testimony of WHY that verse is special to him/her. Cedric shared from the psalms: If God is for you who can be against you? The first verse he ever memorized. We also discussed difficulties in the day and blessings. It is so encouraging to hear these children tell about how the Lord used them that very day. And how they saw the Lord at work around us.

Needless to say, we went to bed fully satisfied — spiritually and physically. And we all looked forward to a similar day to follow.