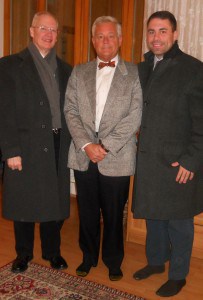 UMO board member Tom Saxon is very much devoted to the challenge of autism in Ukraine. As a former missionary with Mission to the World, he and his wife lived for two years in Odessa, Ukraine. During this time he became aware of the plight of families with children with autism, and in March, Tom came to Ukraine to continue his passionate work to improve the care of these children and their families.

Professionals in Ukraine readily admit the treatment of these children is possibly 40 years behind. In fact, prior to 2000 it was practically forbidden to make the diagnosis. This inhibited the development of adequate diagnostic skills and treatment programs leaving institutionalization the only viable alternative for those families who were unable to cope with the challenge of this disability.

Many of the families have difficulties surviving economically, dealing not only with increased medical expenses but also the need for constant attention by one of the parents, making their employment difficult. Parents often become frustrated, emotionally fatigued and depressed. Ultimately many of these couples divorce.

Tom’s goal is to increase the flow of information of what is known about autism from the West to the East resulting in improved care and assistance for families. To raise awareness and finance this project he has produced a documentary, Not Forgotten, The Untold Story of Autism in Ukraine, which is premiering currently in the USA. (For locations: www.notforgottenthemovie.com.)

While in Ukraine, UMO helped Tom to arrange follow-up meetings with those doctors, teachers and families who were interviewed for the film. UMO has served as the hands and feet of this project in Ukraine. Working with Tom has allowed us to develop and strengthen relationships within the medical community, and present a Christian perspective regarding the problem of intellectual disability.

It was a very intense visit with meetings scheduled throughout the day and evening. Several families are so weary of the struggle they are considering institutionalization. One couple is now divorced. It was so disheartening to listen to stories of rejection from spouses, friends, neighbors, educators and healthcare professionals.

On a positive note, we were able to meet with Yuri Miroshnychenko, a member of the Ukrainian parliament and presidential representative. Jim was invited to a meeting at the Verhovna Rada (Parliament) the week before Tom’s arrival to discuss issues from a Christian perspective in connection with the Alliance of Christian Professionals. Mr. Miroshnychenko has a special interest in autism. Though Jim was in England, his assistant Anatoly Daynega was able to attend and represented UMO.

Also at the meeting were representatives from the Child with Future Foundation (www.cwf.com.ua) and the Association of Parents of Children with Autism. As a result we will be collaborating to prepare a handbook on autism for professionals and parents which will not only aid in the diagnosis but have an extensive list of resources throughout Ukraine. Mr. Miroshnychenko is also interested in Jim’s teaching “Whole Person Medicine” from a Christian perspective.

Through connections with Child with Future Foundation and pediatricians around Ukraine, Jim hopes to provide trainings in each oblast on autism. The key is early diagnosis and early intervention. Pediatricians in Ukraine often lack the knowledge to suspect the diagnosis and make the necessary referrals to child psychiatrists who are the only ones legally allowed to make this diagnosis.

Additional meetings were held with Dr. Ludmila Litwin, President of the Ukrainian Society of Child Psychiatry, and UMO will help coordinate a conference on autism for psychologists and psychiatrists from all over Ukraine this November.

Finally, we met with Olga Nikolayevna, principal of School No. 26, a school concentrating on teaching children with special needs. Jim has worked with this school for a number of years.

We are always amazed by the doors God continues to open for UMO to build relationships, improve the care of the disabled, assist families, and model compassion. May these relationships reveal God’s glory and his desire to provide hope for those who are suffering. We are thankful for the work of Tom Saxon and his partnership with UMO.