For the past couple of years Jim has been collaborating with a group called PRIME, Partners in International Medical Education. This group works within the medical education system sharing and teaching “Whole Person Medical Care.”

An openly Christian organization working within 40+ countries, PRiME shares that much can be learned from Jesus Christ, the Good Teacher and Great Physician, about how to properly care for people physically, emotionally, psychologically and, most importantly, spiritually. PRiME, like UMO, is committed to helping medical systems train students to become more competent, compassionate and Christ-like.

PRiME teaches principles accepted regardless of the cultural, philosophical or religious background of the nation where they are working. This is because it emphasizes those qualities of physicians, nurses and other healthcare professionals that patients are looking for in those providing medical care.

At the end of last year Jim was accepted as a PRiME tutor, and was invited to attend their annual conference just outside London. During his four-day stay, he was the guest of David and Gail Chaput de Saintonge, friends who worked with Jim last year in the Caucuses. They live a brief train ride from the conference site.

The first day of the conference was spent getting to know the group of 25 participants from Eastern Europe, the Middle East, Africa and China. The teaching methods of PRiME were modeled through interactive discussion of the attributes of a “good doctor,” how medicine and the way it is taught have changed over the years, and why PRiME is needed and accepted in so many countries.

As Jim was returning to the Chaput’s home it began to snow. Rarely does it snow much in the south of England, but when it does things come to a standstill. (Just two years ago when returning from the States, Jim and Marianna were snowed in for three days in Brighton.) It snowed all night making the roads impassable the next morning. Jim missed the entire second day.

But every cloud has a silver lining: Jim spent the day being taught by David who is described as the best teacher of clinical medicine in England. David also was one of the authors of the textbook on Whole Person Medical Care published by PRiME.

As the day progressed the sun came out melting the snow enough to make driving a possibility and we were able to visit the Hospice Center where Gail volunteers. 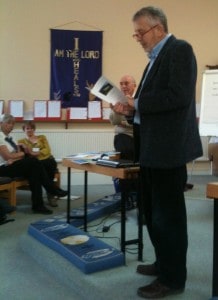 The last day of the conference was dedicated to discussing what makes a good team, the difference in being leaders and managers, and how to empower people to change.

After the close of the conference the group from Ukraine met together with Ros Simpson and Aaron Poppleton to strategize how we can introduce PRiME teaching strategies into the medical schools of Ukraine. From May 13-17, the PRiME team will be in Ternopil teaching and meeting with the faculty of Ternopil State Medical University, medical students and Christian medical professionals in the region.

Join with us as we pray for the growth of this partnership between PRiME and UMO, but also for the influence of Christian principles to reform the Ukrainian medical system.