Prayer Week is a gathering of healthcare workers in regions around the world initially started by Healthcare Christian Fellowship International over 15 years ago to bring like-minded people together for a week of prayer to seek God’s leading in the medical field, both individually and collectively. The week is not spent talking about prayer but actually praying! This has been the single most important gathering we attend at the beginning of each year.

In Europe the gatherings rotate by regions each year between Western Europe, Scandinavia, Eastern Europe and the British Isles. This year the location was Lviv, Ukraine for the first time ever. Even though UMO has now been partnering with HCFI to bring Prayer Week to North America for the past three years, we could not miss this opportunity in Ukraine.

Jim arrived in Ukraine on January 4, allowing him time to meet with both Ukrainian and foreign medical students prior to the beginning of Prayer Week. 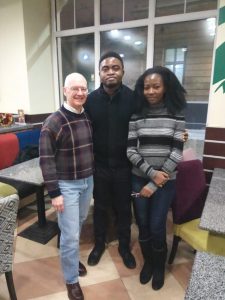 In addition before Prayer Week, Jim also met with Pastor Bogdan Luts who runs the seminary where Prayer Week was held. Bogdan’s wife coordinates a ministry to hospitalized children and their families. Sound familiar? We are constantly amazed at God’s divine appointments as UMO is looking to encourage and expand its vision of modeling compassion in hospitals around Ukraine.

Tuesday was as usual a day of prayer, fasting and silence. We reconvened in the evening to share what God taught us individually during the day. The group developed a list of prayer concerns that included developing a culture of life in 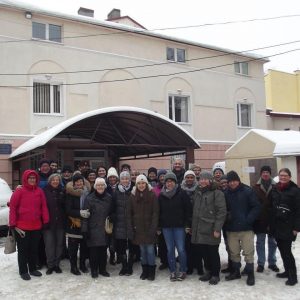 medicine (Pro Life and anti-euthanasia), a sense of true identity for the nations and individuals in Christ, for change in the educational and healthcare systems of Europe based upon Christian principles, and for solutions on how to deal with issues of migration, refugees into Europe from the Middle East and healthcare professionals away from Europe.

The guest speaker for the week was Anne de Leyser. She has worked with many regions and locations in Europe and Africa to establish Local Houses of Prayer with the purpose to bless and intercede for individuals, communities and nations in order that God’s kingdom will come on earth as it is in heaven.

In addition to praying for the issues mentioned, there were special reports presented by Dori Gyori of IHS Global regarding the Saline Process, Alla Shelestovska, an anesthesiologist who works with the Ukraine Mobile Medical Clinic, and Rudi Migovich, a 5th year med student in Lviv and a local Ukrainian pastor who shared the current spiritual climate in Ukraine.  Jim was also asked to explain how UMO is ministering in Ukraine.

In attendance upon invitation of UMO was Erin Arant, one of only two licensed occupational therapists in all of Ukraine. 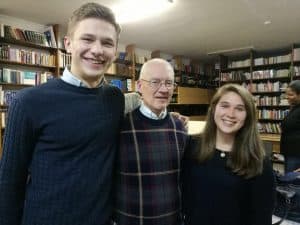 Jim is praying that God will allow this relationship to grow enabling biblical principles to be advanced in this area of healthcare in Ukraine.

Greg Leavers and Chris Dean led corporate worship several times a day. When not at conferences, they minister to elementary school children in Wales teaching them music that Greg has composed with lyrics directly from Scripture.

Jim was encouraged by participants praying particularly for God’s work to be blessed and continue through UMO.  A first-time attendee invited Jim to Austria to tell of the work in Ukraine and to discuss how the medical group there might participate in the ministry.

Much to be thankful for and much to be done!