We like to gather the ‘team’ here for dinner on a regular basis so that we can all get to know each other better — outside of a hospital setting — and also so that we can understand frustrations and successes in the ministry.

Last night we invited Lena, a volunteer with UMO, to join Viktor, Katya, Olga and UMO assistant Toliy for this evening of non-rushed communication. In addition to the work that Lena does with Marianna, she also substituted at the hospital when Katya was on vacation for two weeks in early August.

The work that these ladies do is often thankless and sometimes even slightly confrontational as they advocate for the well-being of these abandoned little ones, all suspected of being HIV+. Viktor also has the privilege through his connections as a social worker to speak to parents who have kept their HIV+ children, but find the stigma nearly unbearable. Or the drug regimen is more than they think they can handle. 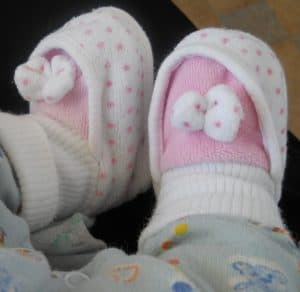 One little boy — we’ll call him “Nikita” — was brought to the hospital by a man who said that the mother was simply not taking care of her newborn. It was quickly apparent that he had severe diaper rash in addition to an infection around his neck where rolls of sweet baby chunkiness were not cleaned and the sweat caused by excessive heat was taking its toll. The man explained that the mother only found out at the delivery that she herself was HIV+. Her reaction was to go on a drinking binge that left Nikita unattended.

Later we learned that this man was not the father as assumed — the father is in prison — but the live-in boyfriend of the mother. Viktor went to the mom’s flat to discuss the future of her son only to find that she didn’t want to talk to him. She did, though, begin to show up at the hospital…she was not allowed to enter Nikita’s room, but she spent much time at the large window learning about Nikita through our caregivers. She delivered diapers and formula, and declared that she did not want her rights removed but instead wanted her son back home. Thankfully Viktor was able to visit her several times and noticed improvement. He was then able to pass this information on to hospital personnel who stopped the proceedings and Nikita is now home with his mom. After fearing that she would lose her son, reevaluating her life, she has made significant changes in her lifestyle. Viktor has invited her to church where, by the way, I hope to snuggle that little boy once again. Praise God!

Another story involved an HIV+ mother and her two-year-old daughter. The mother has refused the required treatment for her daughter — she does not take any treatment for herself either. The little one was hospitalized for a secondary issue, and as only God could orchestrate, the mother and child were across the hall from ‘our’ room. Viktor spoke to her regularly about the need to begin her child on a specific drug regimen. For two years no one has been able to make the mother understand, but Viktor, by the grace of God, spoke the right words at the right time. The precious little one is now receiving life-extending treatment.

Two seemingly small victories in the big picture, but HUGE successes for the children involved. We can’t ‘fix’ everyone and everything, but, oh what a difference we can make one on one.

Ukraine Medical Outreach is so thankful for our dedicated workers. And continue to thank those of you who are helping to fund their work! They have requested additional workers so that the care for these hospitalized ones will be 24/7 and not simply six days a week. To bring on a couple more workers will bring the total needed for this ongoing work to $1300 a month. That covers round-the-clock care. In a 31-day month, that is less than $1 an hour.

Anyone wanting to sponsor a day, or a month, or whatever you feel led to give, please let us know! Lives are improving by the tender touch of our team.

(You can donate by pressing the red button on this page, or by mailing a check to our stateside office. We are happy to answer any questions you may have!)