From Europe and America, speakers began to arrive in Ternopil for the pre-conference prayer meeting.  Many of these speakers traveled to Ukraine as a direct result of UMO participating in three events:  First, the International Saline Partnership meeting in January (This group consists of nine Christian medical organizations who have agreed to use the International Saline Seminar as a uniting program in all of their organizations);  second, the Hope 2 conference in Budapest in May where UMO developed relationships with PRIME (Partners in Medical Education); and  third,  when UMO sponsored the attendance of conference leader William Lamptey at the Healthcare Christian Fellowship International World Congress in Manila at the beginning of September.

We looked forward to getting together on Friday night to pray before the actual conference began on Saturday.  For several days leading up to the conference, prayer requests were  sent around the world:    Several medical universities were refusing to let their students participate saying the conference was neither medical nor academic enough.  Several speakers canceled less than 24 hours before the conference began. Then there were issues of funding, transportation, signing certificates and putting together information packets all prior to arrival of the majority of participants the next morning.

The conference site was located about a half hour away from Ternopil in a village called Kalina,  located in the middle of open fields and rolling hills which some might say was the middle of nowhere.  Despite its location, the facilities themselves were terrific compared to previous conferences.  Also the price was right.  The Ternopil State Medical University which owns and operates the center agreed to let us use all the meeting rooms, as well as audio-visual equipment and staff, free of charge.

Many of the speakers arrived earlier in the day and were staying at the center, so we took advantage of the unexpected free time to get to know one another.  We discussed logistics, encouraged and prayed for each other.  None of us completely knew what to expect over the next few days, but all were willing to submit ourselves to the will of God.

The dark night, isolated location, and poor signage led to difficulty for both the worship team and a bus load of students in finding the center. This delayed the start of the prayer meeting by about an hour.  Many thanks to Pastor George Markey and the worship team from Calvary Chapel Church for leading us into prayer.  During the prayer time we broke into small groups of 3 to 5 to discuss selected scripture with the purpose of developing a biblical perspective of the medical profession.  We prayed in small groups and corporately for God’s presence to be with us during the conference, safety in travel, the medical universities of Ukraine, medical missionaries worldwide and individual prayer needs.  Most importantly, we prayed for understanding from God’s perspective regarding how to care for people and his purpose for the medical profession. 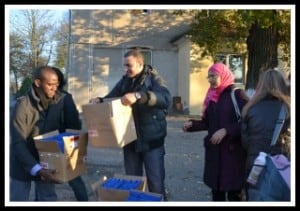 With Kalina being located outside the city and the center only having room for approximately 100 participants, the remainder of the group required transportation.  Approximately half of the participants were from Ternopil and the rest were accommodated at a Catholic seminary and retreat center, Zarvanytsya.

The participants began arriving at 9 a.m.  The auditorium was packed with many choosing to stand even though extra chairs were provided.  It is difficult to find inexpensive, quality facilities for conferences in Ukraine for groups larger than 250 to 300 people.  The opening ceremony began with worship, moved to greetings from dignitaries from the University and concluded with introductions of the speakers.  This was followed by the first plenary session, 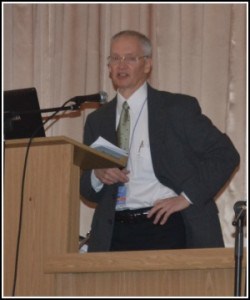 “The Scientific Evidence for the Role of Faith in the Health of Patients,” presented by Jim. There were also short presentations by students of original research projects.  Master classes began after lunch.  These ranged from the very practical and basic to the more detailed management of prostate cancer from diagnosis to death.  Many of the master classes focused on the “Whole Person Approach” to medical care, treating people —  not just patients.  The speakers encouraged dialogue with the students and addressed not only the physical but the spiritual issues involved, and the first day ended with a question and answer time.

Sunday morning arrived with a slight chill in the air, blue cloudless skies and sunlight sparkling between the golden leaves falling from the trees surrounding the center creating a carpet of yellow on the forest floor.  We asked God for good weather and he provided two beautiful days with cool mornings and warm days.

The African students led a wonderful time of worship a capella.  This was so enjoyed by all.  I am thankful God has gifted people so liberally. 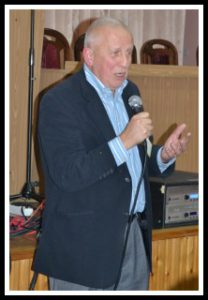 Twenty-five minutes before the service was scheduled to begin, we learned that our planned speaker would be unable to share a message from the Word of God.  Huddle. Prayer. And two men agreed to share. Dr. David presented his testimony.  He shared that he was the man he spoke about in the case study with prostatic cancer.  He said that although his earthly prognosis was grim, God had given him strength and a real hope for his future.  You could hear a pin drop as all listened intently.

The remainder of the day held the second plenary session, the fourth master class and the closing ceremony.  At the end, certificates of attendance and appreciation were presented.  The Ternopil Local Organizing Committee deserves a big note of thanks for all of their hard work.

Following the conference, a few key leaders remained to take part in round table discussions with the faculties at the Ternopil State Medical University on Monday and Tuesday.  John Geater (PRIME), Tove Giske (Nursing Christian Fellowship International), June Johnson (missionary nurse in Crimea), Sharon Kuhn and Wiley Smith (both Mission to the World, Medical Division) and Jim met with the Rector, the Dean of International Students, and the Dean of the Nursing program to discuss the possibilities of further collaboration in the future.  We pray for God’s leading and wisdom as we strive to determine how Biblical principles and perspectives may be introduced into the medical curriculum of Ukrainian medical universities.